Skip to content
Cart
So today I was lucky enough to get up to the Lake District for a meeting with a magazine, but also to get some kit testing in! I drove up last night and got in around 11pm.....pretty tired. Weather was shocking with heavy rain and strong winds all the way up pretty much.
Not much change this morning except the rain had abated, leaving fresh snow on the hills! Magic! I had forgotten how beautiful the Lake District is, and of course it reminds me of home in North Wales.
So after my meeting it was off to climb Helvellyn. I had the dog with me and he was totally psyched for a big hill.

However, what neither of us was quite prepared for was the wind! Kit wise.....not a problem, I had on all the right stuff....in fact today I was testing the soft shell trousers with Super Thermo longs combo.....more on that in a little bit.
So kit list was: 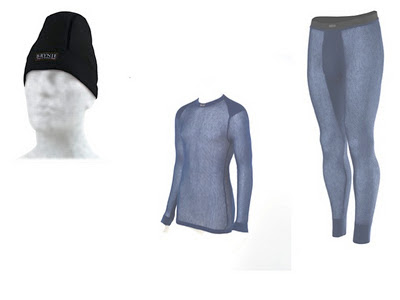 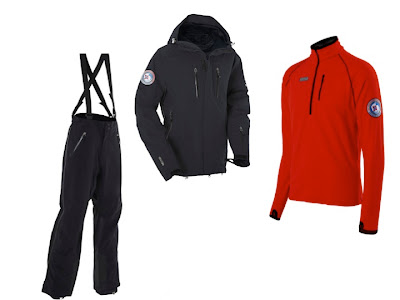 We started up from Swirls car park (had to pay $5.00 to park for two hours.....!) and it was blowing a nice cold gale! Bentley, the dog, was loving it......no sheep in sight! Sheep = lead.....so seeing sheep for Bentley is not a good thing! Anyway, started up at a good fast pace, but soon came to realise that I was getting pretty warm. So, I unzipped the trousers a bit and then unzipped the arms pits on the jacket. Big mistake! The wind howled through.......it was just too windy to vent like this! So i vented through the front zip, and it worked OK. I'll be honest and say at this point  I though I was over dressed and was going to run too warm. However the next elevation gain up to the snow line soon changed that though! 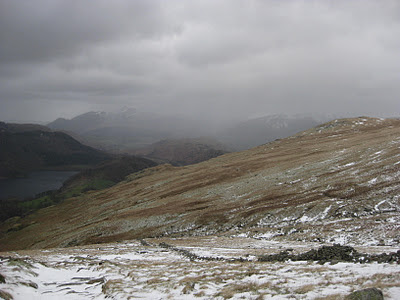 The wind picked up again and the temperature dropped to about 1 degree Celsius. I could see big squalls coming in towards us (see photo), and there was more and more snow on the ground. I had my ice axe, but no crampons (long story.....which has a happy ending i.e. I got to buy some new ones!). It was OK underfoot, but a little difficult to kick steps. What you can't see in the jacket photo is the superb fur lining. Now I though this fur lining was for the Polar guys, but let me tell you, when you start getting hit by horizontal snow and hail, that little bit of fur around your face does wonders! It seesm to trap warm air around your face, and also act as an additional barrier against the weather coming in! I was loving it! A little further (I mean a few hundred meters only) it got really bad, with gust I recon blowing at about 80mph. It was getting difficult to make forward progress, and worse, the dog was getting battered by snow and hail. We took cover behind a small rock as it approached white out conditions. Even through the clothes I was wearing, I could feel the sting of the hail as it hit me! I held the dog close, and let him bury his head in my jacket.....he was not having fun! I however, was and was really impressed with the kit keeping the wind out.......at 80mph! 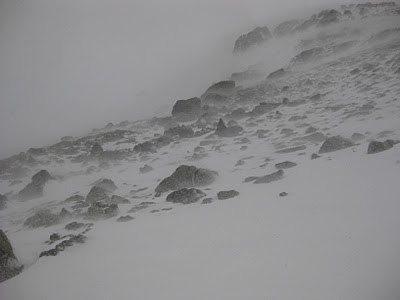 To be fair though, it's hard for me to compare the Brynje Skald soft shell kit I had on with anything else, because I've never been in such conditions before on a mountain in soft shell kit. However, the Super Thermo continued to work brilliantly, and the Polar Bug fleece was super warm and wicked brilliantly. I wore mesh on mesh so to speak (Polar Bug as a mesh liner) and this was the ticket! However, along with the brilliant Skald, the find of the trip was the Super Thermo hat. I was AMAZED at how wind proof it was for a beanie! It's not billed as being windproof at all, but until we got into the really nasty stuff, it felt like it was blocking the wind, and certainly keeping me warm.
At this point it was a struggled to stand up in some of the gusts, but the hail had stopped so we made our way up a small snow slope and topped out at Brown Cove. However, the dog by now would not leave my side and was trying to shelter next to my legs.....making it hard not to kick him while I walked! So we turned around. This had the added bonus of allowing me to glisade down the snow slope! Super cool! Haven't done that in a LONG time! In fact it's been so long that I sometimes forgot to keep the ice axe close in, allowing me to build up an uncomfortable speed!
We slowly got back down below the snow line, and the wind eased to a mere gale. I forgot to mention that it was so nasty on top that even the camera refused to come out and stopped working! However, once lowered down, I managed to tease the lens out and get a rather crappy picture of me in the kit. Notice the horizontal reeds in the picture indicating the wind strength! 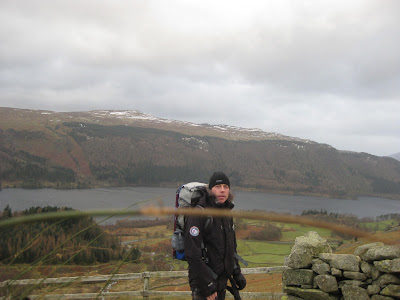 I'm starting to really love my Skald jacket, and after this trip I have a new appreciation for the fur lined hood! The Polar Bug fleece was great, doing exactly what Brynje told me it would do.....keep me warm, help regulate body temperature and push out all the moisture.
I'm holding my judgement on the Skald trousers, because I think if it wasn't for the wind, I would have been too warm in them and the mesh longs. As it was, they were a god send on the day, doing a fantastic job  against the wind and the snow.
Not sure what's next, but I definitely have the winter hiking bug! I had a great time.
Share Share on Facebook Tweet Tweet on Twitter Pin it Pin on Pinterest
Back to The Right kit