Optional button
Have been using the Brynje Super Micro T-shirt all this week due to the "warm" weather. To be fair it was warm on Wednesday when I decided to try running in just the Super Micro T-shirt. It was also a very  humid day with the temperature about 22C. One of the great challenges of summer activities is finding something to keep you cool, without getting sodden. There are two obvious reservations for anyone wishing to run in the Super Micro range.
I can mostly answer these two points now having run for about 50min through the Ashdown Forest. So basically I didn't get shot or sunburned! However, more trials are needed on the sunburn front. We've been selling the shirts to a few fell runners, who obviously need more then 50 min protection. So, I'll be waiting on sunshine and running up to an hour and a half to see what happens......and if my pale celtic skin doesn't get burned, I think that most people will be OK.
In terms of performance, it worked a treat, although there are a few caveats. As you'd expect, breathability is excellent with the micro mesh allowing you to regulate really well, and the synthetic material moving moisture very quickly away. The only place I could feel moisture build-up was on my back. My front, side etc were all feeling cool and dry. I have not found ANYTHING to deal with the amount of moisture generated on my back by running on a hot humid day. Also, in areas where the mesh is loose (i.e not snug to the skin), you loose a little performance. It's not very much, but obviously the mesh needs to be on the skin to be performing at it's best. You can see from the picture that it's a little loose around the belly for me. So to achieve the MOST efficient performance, the mesh would need to be snug against all parts of the body. Unless you squeeze into a shirt a few sizes too small, I don't think the majority will achieve this. Again though, this only reduces performance a little in isolated areas. In order to increase the "snug" factor, I also always tuck mine in. 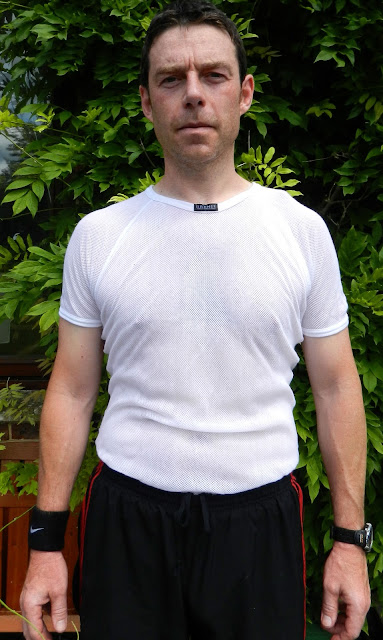 All in all, I'll be wearing it again for sure on hot days. No solid top I have tried can perform as well when it comes to breathability and moisture transfer.

Brynje Super Micro T-shirt part II. Today was about 17C, promise of rain and some wind. So, decided to get on my MTB and head to the forest. It's been WAY TO LONG since I've been on the MTB, but there simply aren't enough trails close by that I can ride. Mountain biking was my first love (well, actually it was BMX and bunny hopping stacks of bricks in my back garden!) and when I lived in Nevada, California and Norway it was pretty much all I did! So I was pretty excited to head down to Sheffield forest (which is actually in East Sussex!) to bomb around some trails we had scouted previously. It was very wet, and flying through fields to get to the trail was a blur of mud and water (I was starting to miss the mudguards on my Enigma!). It felt really good, and with some old map reading skills, I found my way to the main part of the trial I had scouted. Unfortunately, due to the Billions of gallons of rain we had, the trail was like a jungle! Massive Bracken, brambles crossing the track and head height and stinging nettles to top it off. On top of this, there where a lot of fallen trees crossing the trail, and loads of smaller, rotting branches.
It was warm work and sweaty......bursts of hard slogging through mud, using momentum to push through, followed by stops to look at the map. I had my Brynje Super Thermo T-Shirt on again, with my Altura transformer (transformed!) with not sleeves! Decided to add a bit of spice to the pictures so hence the Usain Bolt impression! I realised later than my right hand needs to be pointing a little higher......but that's what you get when you do a self take! 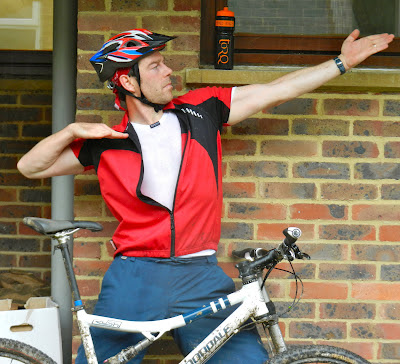 This Super Micro shirt is becoming my default now in this weather. I could vent the Altura to dump heat when working hard, and because of the mesh, you loose the heat straight away. If you had a solid on underneath, this would be far less effective (I've tried it!). If you had nothing underneath you could also dump the heat.....but then you'd get cold pretty quick, and would not have the same moisture transfer capabilities. So the mesh really does do it all. I was very comfortable, again with great temperature regulation, no hotspots and no soggy back.
So running or biking.....or even hiking.....this Brynje Super Micro T-shirt is now the go-to top for summer activities.
Share Share on Facebook Tweet Tweet on Twitter Pin it Pin on Pinterest
Back to The Right kit
Example blog post
Example blog post
Example blog post