Continuing on my sales tour of  England and Wales, I ended up in the Lake District on Friday. After a meeting with Bergans in Kendal, I drove the next morning to Great Langdale, to the National Trust campsite. It's a fantastic spot, and as you approach the valley you get a real sense of leaving everything behind........except for the fact that there are two good pubs within five minutes walk!
I knew the weather would not be great, but I was here to get up Scafell Pike, England's highest mountian. I had everything I needed to get me up, including my main piece of kit to test, the Bergans Helium lightweight waterproof jacket.

This jacket by Bergans is competing in the lightweight, multi-activity jacket segment of the market, and in my opinion, competes very well. On price alone, when you stack it up against the favored Montane Air, the Bergans, at $254.00, is a $169.00 cheaper for a start!

The jacket also weighs in at 340g (Men's Large) which is again at the lighter end of the other jackets in the segment. It's made with 21/2 layer Dermizax, which is the waterproof fabric used throughout the Bergans range. Dermizax is a hydrophilic material, unlike other membranes which are micro porous. This means the Dermizax doesn't have pores that can get clogged up with dirt, grease, soap powder salt etc. This allows Dermizax to maintain it's waterproof and breathable characteristics even when dirty......and advantage over some of it's competition!
So it's lightweight and packable, as can been seen from the shot above. I packed it loosely into the mesh side pocket of my Deuter X Air 15 L rucksack. It has a good hood, which again is similar to it's peers, with a wired hood with an adjustable shock-cord for adjusting the volume of the hood. Two further shock-cords allow you to pull it tight up against your face for maximum protection. There is also a hem shock-cord and velcro cuff adjustments to keep out all weather.
If I'm honest.....and I am......it's about as waterproof and breathable as any jacket at the top of this segment. I really don't believe there is much to choose between jackets when it comes to these two factors. So many of the manufacturers use the same fabrics so how can they be different? It comes down to details and fit. One nice detail on this jacket, that others in the segment tend not to have, is the under arm vents. These where a bonus during the stuffy weather up in the Lakes, and I used them to vent in all but the worst downpours. Getting air to circulate is crucial in helping breathability and moisture transfer.


The jacket has two decent hand warmer pockets, with all zips toggled as you'd expect these days, and all with a zip housing at the top. The zips are water resistant with a flap on the main zip to "channel" the water down and out if it get's through. I did not experience water getting through despite heavy rain.
So how did it perform? Well it was waterproof as was very well tested during my day out. It rained heavily and solidly for a few hours on me on my way up to Scafell. In fact, I didn't reach Scafell because a vicious thunder and lightening storm came in and cloud enveloped everything......more on that later. However, as expect, the jacket was waterproof, but struggled to breath(just like any other jacket would) with the high humidity and ambient temperatures. This is where the pit zips come in. It was great to be able to unzip them and let some of that heat out, while the circulating air helps get ride of the moisture.

So in summary:
A great Summer jacket which will carry you easily into the Autumn and will do the job in Spring.
Check out the Bergans Helium jacket at Nordic Life

As mentioned, I camped at the superb Great Langdale National Trust campsite and spent Saturday pitching the tent, settling in, getting some supplies and then going for a trip up to Stickle Tarn. 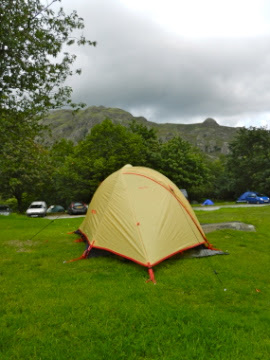 The trip up to the Tarn was just a pull up along Stickle Ghyll in glorious sunshine.....well glorious at least in one direction.
Once you get to the Tarn, you are faced with Pavey Arc and the view of the infamous Jack's Rack scramble.....a Grade 1 by all accounts...but two people died when they fell off in June.
After a much wetter trip back down via Langdale Pikes, I went to try out the Old Dungeon Ghyll pub. It has a reputation as being a lively climbers and walkers pub, but it was fairly subdued at 7pm on a summer Saturday night. That was fine with me, as I had a long day ahead of me and a wet dog to sort out......in a small tent!
The next day promised heavy showers and storms.....much the same as Saturday then, but I still thought it would be no worries. After all, I had all the kit I needed.
For once, the weather man was bang on. Woke up to low cloud in the valley and a really humid feeling in the air. I had some breakfast, got kit sorted and headed out down to Mickleden valley. It's a beautiful spot, and felt very isolated. I did meet a lone walker after some time , but we parted company at the head of the valley as I head up towards Angle Tarn, and he on up to Stake Pass and on to Keswick.
As I got higher, the cloud seemed to move away to reveal the landscape.....I love it when this happens.....and I started to think(foolishly) that all this talk of rain was simply the weather man playing the guessing game. I passed Angle Tarn and spotted a few wild campers up above the Tarn. I figured they must have had a wet night though if it was anything like the night we had down valley. But then it came, slowly at first, making me keep the Bergans Helium in the pocket. Then it started to rain enough for me to put on the jacket. It was very humid, and I was working climbing up hill. The pit zips where a welcome addition and I opened them up fully. However, the rain just kept getting worse.

I met some of the campers from the Tarn and they looked pretty wet. We checked each others navigation as we headed on to Great End. I left them as I needed at this point to put on my waterproof trousers (I was in shorts). I let them head off into the cloud. I started to see lightening and hear thunder......hhhhmmmm was this a good idea? I was pondering what to do when the two guys who had been in front of me came racing back towards me “This is no place to be in a storm” one of them said. Finishing my pondering then and there, I turned back with them and we made our way back to Angle Tarn with lightning and thunder getting worryingly close.
We chatted on the way down as we put more distance between us and the storm. The rain was still heavy and my rucksack was soaking. I had everything wrapped up in waterproof bags though…..one of the other guys didn’t and relied on the “waterproof” cover provided with his rucksack. He spend a long wet, cold sleepless night he told me as all his kit was wet or damp after hiking in last night.
As we reached the tarn, the weather eased, or at least we had left the worst of it behind. So, instead of high tailing it back to camp the same way, I decided to go back via Stake Pass, Pike of Stickle and down through Langdale Pike.
Turned out to be a good call as the weather improved enough to make it enjoyable, but looking down valley, making me realize I had definitely made the right decision to give Scafell a miss.

Thunder continued to sound out all afternoon.
The mountain didn't let us on this time, but it's a very valuable lesson......know when to say enough is enough. I know it's not Everest, but same lesson applies...the mountain will always be there as someone far more famous and well respect than me once said!
Share Share on Facebook Tweet Tweet on Twitter Pin it Pin on Pinterest
Back to The Right kit